Tag a weekend in Taiwan

My impression is that nobody really knows where Taiwan sits in the world of touristy-flavoured adventures. I for one, am was no exception, in fact I must admit having chosen this as a holiday destination solely based on its lack of Visa requirements and the flights being cheap at the time.

Admittedly both reasons aren’t particularly inspiring. Despite this, it was the fiscally responsible choice and therefore the only logical one.

Being painfully aware that the dialogue I learnt from Crouching Tiger hidden dragon would be unlikely to be of use to me outside of situations where I am required to draw on my ninja (Wudang) skills, I made a plan for 48 hours of communicating through clicks and grunts.

Having such a plan required two things:

Being unable to acquire the first of these I engaged the skills of Google to find the second. My strategy was simply to make a list of things I wanted to do/places I wanted to see and print out the Chinese characters (I assumed) would communicate these concepts (such as food, hotel, Taipei 101 and internal bleeding).

This plan was I already knew far from fool proof, particularly as Taiwan was unlikely to be a text based adventure.

In fact I learnt this lesson right from the outset, having no language card for “bus” or “driver, where the hell are we going”? 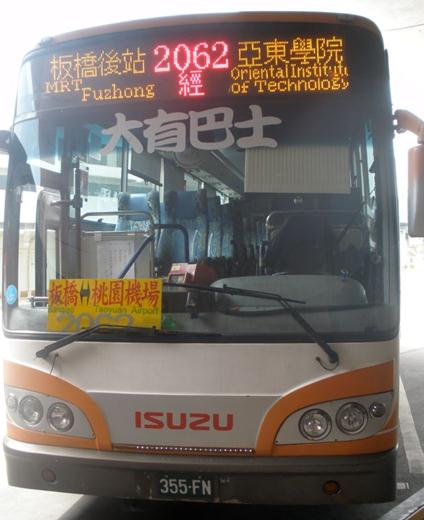 After landing in Taipei with as little much as a sideways glance from customs officials I put my best confused westerner face and remembered what I knew about written Chinese: the symbols kind of look like what they are. For instance the character for person looks like this:

Which is extraordinarily accurate if you focus on people from the waist down. Even without this being true, I also figured I would be able to navigate through matching the characters from my map and street signs.

And with my new found sense of dependence I got off the bus right in front of my first temple: 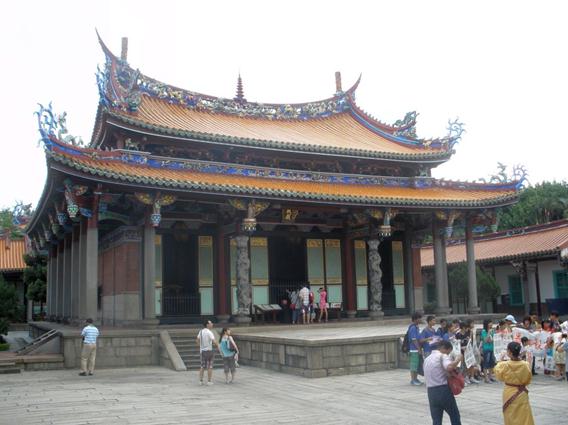 Now I personally don’t remember what the significance of this particular temple was but it dragged me inside both because it was the first touristy thing I had seen and because being a temple it was bound to sell hot dogs (or so I thought). Fortunately for the temple’s personal integrity there were no hot dogs, rather there were a lot of kids graduating from calligraphy classes and sculptures of dragons.

Now the man-child in me wants to tell you more about dragons. As you might expect there are dragon carvings and statues all over the place in Taiwan but one of the things which struck me was they looked more like the love-child of bebop and rocksteady than the dragons I’m used to.

So I asked the tour guide (in a culturally sensitive way) why this was and she said that their dragons look like they do because they are made up of all the most powerful parts of other animals (the claws of a lion, teeth of a dog, scales of a snake, wings of a bird etc etc).This certainly was a good explanation but one which didn’t explain why the hell the dragon had the eyes of a prawn (WTF ROFL?) Anyway this paragraph is boring and so here is a full stop to put an end to it.

I should say something of the number of temples there were in Taipei: A shite-load. Obviously never having been there before (or knowing much about the city) this was a pleasant surprise as it provided me with ample opportunities to atone for my latest sin (I try to average one sin per 3 city-blocks so temple-density is an important factor for me).

This is the Dr. Sun Yat-sen Memorial Hall, which at the time was housing the international biology Olympiad. Best after-party ever.

Now what made seeing the hall pictured above particularly cool was it was massive and housed the most polite giant I’ve ever met:

Out of respect for the man behind the statue (the founder of the Republic of China) please find a link to a Wikipedia page which goes some way to explaining why he has a statue inside a hall of epic proportions.

Epic proportions is also a good segway to this: 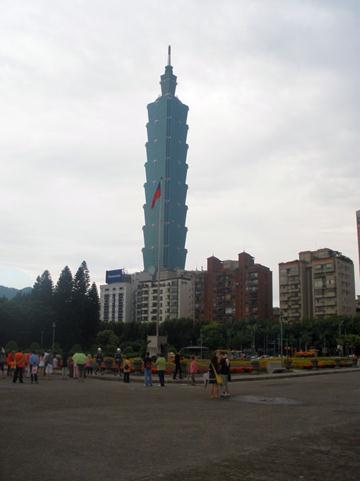 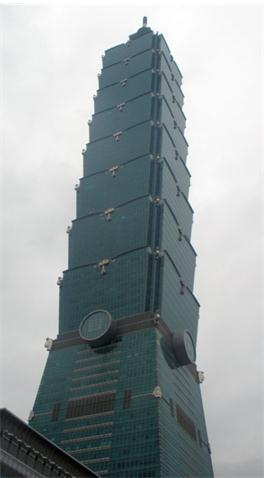 Taipei 101, the second tallest building in the world.

If people know one thing about Taipei it’s likely to be their reputation for making everything not from China and Taipei 101, the world’s (2nd) tallest building.

In fact it was the tallest building in the world until Dubai took this title in show of one-upmanship in 2010. I’m not going to go on too much about the experience of actually going up the thing seeing as it’s an experience one would expect. You go up a lift and surprise, surprise you’re really high up and can see stuff. Meh.

However, what wasn’t high on my Meh scale was everything else about Taipei. The streets are clean, the rail system is excellent (and had subtitles) and slow people keep to one side of the escalator where they belong (unlike Sydney).

The place is also packed with random stores, markets and cool little streets and stores like these: 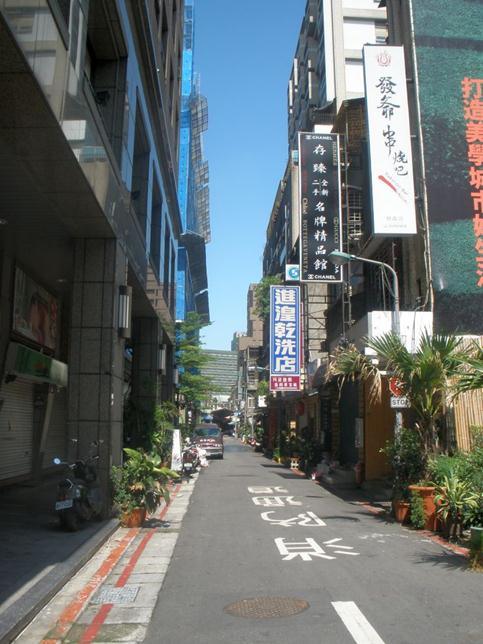 Unfortunately as much as they reminded me of a cooler version of Melbourne I didn’t find any cool cafés (loss) but there also weren’t any people wearing skinny-leg jeans (win). I did, however, find lots of lots of cool markets even when I wasn’t looking for them. 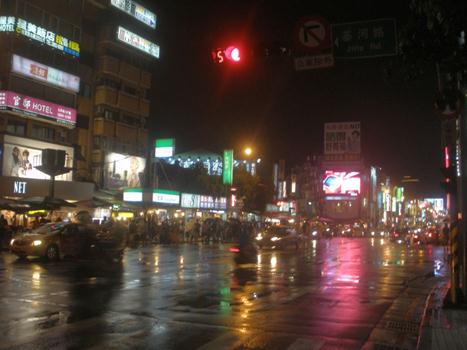 Finally something made in Taiwan -The Shinlin Night Markets.

So I’m not sure what there is to say about the Shinlin markets. They are pretty much like any other market you’ll go to in an Asian city except there is less crap.

I’m not really sure what this shirt is about.

Actually what really attracted me to markets, wasn’t shirts which make no sense it was to eat stuff.

Mmmm that is extra malty! 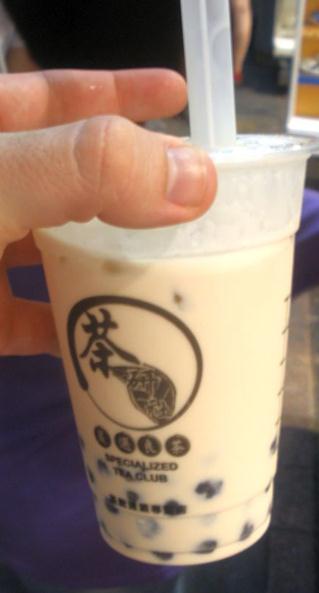 No freakin-idea. But it tasted like an uncooked pancake. 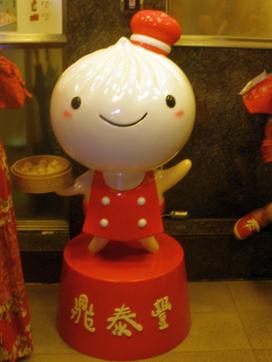 Ranked one of the top ten restaurants in the world, the original Din Tai Fung shop.

So what can I say at the end of my epic waddle around Taipei?

Highly underrated tourist destination. The food is cheap, the city is safe and clean and the people are patient enough that they don’t mind you pointing at food when you order.

In fact it’s the kind of place I’d love to live at some point in my life. Unfortunately until somebody invents a real-time babel fish I’m unlikely to be a very attractive job candidate. Despite this I am ready to pounce as soon as there’s a vacancy for someone willing to eat everything and make repeated cultural faux pas.